Film Review: The Killer Inside Me 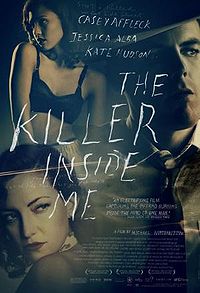 The Film Critic Inside Me

Note: This review reveals the fate of several characters.

“Well there ain’t no harm in lookin’” I said. Jerry Lowe had owned the old picturehouse on the dust belt since I was a boy but this was the first time he’d ever asked me to look at a picture for the purposes of writing my thoughts on it.

I’d tipped my Stetson to Jerry earlier that day at the Greek’s place. The old fool hardly ever said two words to me but that afternoon he came over, just as I was soaking up the last of my eggs with a nice thick wedge of toast. I hid my annoyance behind a Cheshire Cat grin. It never pays for folks to know what you’re thinking.

I hadn’t heard, but Jerry went on to tell me that the confession I’d given to Jim Thompson, a writer from the west coast, had now been turned into a motion picture. Jerry wanted to know if I’d look at it – give my thoughts to the Chronicle. I said I would.

In Central City, people didn’t know me as a movie critic. They didn’t even know I liked to watch movies. Sweet, kind, schizophrenic old Lou, that’s what they reckoned. To Jerry and many others I was just a meat and potatas, fine young man from a good family. Later, when word got out that my Daddy, once the only Doctor for fifty miles, had been a sexual sadist and had beaten some girl ’till her backside looked like a blueberry, well, there were some funny looks but they didn’t get it. When it came out that the girl, who like all women liked a beating, wanted me to do the same to her, and I did, and these games warped my sexuality causing me to touch a five year old, there were more looks, but still they didn’t get it. Later still, when it came out that I’d never lost the sickness, and I’d beaten my girl to death, pulping her insides with my fists, and tried to set up some bum for the crime, and half beaten another by mincing her face with everything I could muster, finally, they got it.

The thing was, I hated women. Didn’t mean to, but something in me was broken and I couldn’t love ‘em. When I looked at Amy or Joyce, the two women I killed, I saw cloudy minded, materialistic, needy victims. Their soft skin and breasts that I could knead like fresh dough attracted me, fascinated me, but their weakness and lack of common sense was revolting – something that had to be destroyed.

Now I know what you’re thinking – women are no different from men, right? They’re real people – they got dignity and self-respect and they ain’t just out for themselves. Any movie about my exploits would have to deal with that, surely? I was thinking about that as I watched the movie; wondering how Winterbottom would handle it. You see, my account to Jim Thompson is written in the first person. It’s my version of events. My subjectivity. So when Thompson recounted what I told him he would have to deal with my misogyny and the notion that women like violence and get a kick out of it, because that’s how I saw it. I was, what they call in literary circles, an unreliable narrator. I was reliable in the sense that everything I told you was true to me, but unreliable in a broader sense because you had no-one’s word but mine that what I said was how it was.

The trouble with the movies is that there’s a shift in perspective. You can add a bit of voice over to suggest the story’s being told from my point of view, but as the viewer don’t have access to my internal monologue and is something of an objective observer, they might reckon that the way all the characters act is how they are. So I guess what I’m saying is that any adaptation of my account can’t be too deferential to the original source. At the very least a movie director would have to give us hints that the women aren’t submissive automatons. They’d have to provide some notion that there was a disconnect between the way I wrote ‘em and the way they are. But Winterbottom must have liked my account plenty, because he stuck to it like a bee to a honey sandwich.

Old Jim Thompson did invite readers to draw their own conclusions. There was that moment, to give you an example, when I’d half punched Amy to death. I’d pulled her dress up over her head so I didn’t have to see her gawping mouth and she’d started to leak from her underside. It weren’t too dignified. Then she reached for her purse. I remember thinking, typical Amy, her last thought is for that purse – I guess all women think about their goods, right up to the end. But later, it turned out that there was a letter in there for me. She’d written one to say that she loved me and even though we were eloping, if I wanted to take more time out, get my head fixed, then that’d be fine, because she knew I had something going on in my mind all along. Thompson was saying ‘Look, Amy ain’t a fool – she’s astute, kind, caring – wants Lou more than an easy life.’ So that’s irony, I guess. The problem is that in the movie, that’s kinda undercut by Amy being so dreamy eyed and pliable. You got to remember that this is the filmmaker talking, not me. It sounds bad when he says it.

That kind of stuff brought down the film for me. That and my character saying I loved these girls all the time, which is something I never said. It was mostly how I remembered it but somehow, pulled out of my brain and told from God’s view, it just seemed less real. The mind makes chaos seem logical, it simplifies things. It forges connections which make matters easy to understand. But when a movie does those same things it can look like contrivances. It seems like you’re asking an audience to suspend its disbelief too much.

Don’t get me wrong, I liked a lot of it. Casey Affleck, the actor who played me, was good. I was afraid of him. He understood the difference between how you act in public and think in private, and considering he had to put all that across with his face, he did a fine job. It was a pretty looking film too. I liked the vintage looking titles and the tight two-shots – made me think of those old film noirs Daddy and I used to watch after he’d finished with that girl in the bedroom. Yeah, I knew plenty about films and I knew this one had been ambitious in trying to translate the Thompson book to the screen. But perhaps because of the simple prose, Winterbottom had underestimated how hard it was to solve the tricky puzzles of perspective and the way the women came across.

After the screening, Jerry came bounding over – full of beans.

“It weren’t bad,” I said, “you got a smoke?” It never pays to let folks know too much about what you’re thinking.