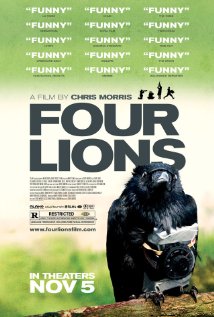 Note: This review reveals the fate of some characters

Chris Morris’ debut feature, co-written by Peep Show’s Jesse Armstrong and Sam Bain, is a morbid farce, putting a gurning face on the common or garden Islamic terrorist. If you’re going to take the film seriously you’ll need to wash out any nonsense about a verboten subject matter or discomfort at humanising suicide bombers. Suicide bombers are human, unless they’re crows, and Morris is merely reflecting a cultural preoccupation in the tradition of Conrad’s Secret Agent and many before him. There’s no attack on the tenets of Islamic doctrine, rather the nature of bending doctrinal values to support political thinking and the vacuity that underpins identity politics. In short, Morris has brewed a tonic.

Thematically, this is familiar territory for the satirist. Morris’ best work, notably Brass Eye, has used a process of defamilarisation to deconstruct the way in which reality is packaged for presentation to the hordes. News and current affairs, for example, is a false consciousness, like Islam, with its interpretation of human experience similarly kneading the individual out of shape using much of the same toolkit – pious language, agenda setting, veneration and demonisation, potent narratives and absurd agents, mired in their own pomposity.

If Four Lions doesn’t work as satire, it’s because the vagaries of the Islamic faith and its patrons are harder to understand, such is the plurality of viewpoints and the decision to focus on the receivers of Islam, rather than the mode of doctrinal transmission. This is not a film about the Islamic faith, though Morris makes the point that those that understand Qur’anic teaching and follow it, er, religiously, a la Omar’s strict Muslim brother, are held responsible for extremism by ignorant authorities, while the less conspicuous loon-a-toons buy camping equipment and board tube trains.

The media was an easier target for Morris because its conventions are better understood and its arrogance, manifest. It was about the package, not the people who opened it. Morris, himself a media agent, though ironically labelled as a “media terrorist” in some quarters, used the tools of his trade to ensure that the emperor had no clothes. Regardless, The Day Today and Brass Eye hated the feckless public who licked from the media’s bowl as much as they rejoiced in showing you how the magician pulls the tricks; cocks accosted on the street and made to read out nonsense for example, or opine on matters they know nothing about. There’s a similar contempt for the dull intelligence of the average Mohammed in Four Lions: these mongoloids just cultivate their lack of understanding in a different field.

The humour is mined from the gap between the hollow rhetoric, which Morris gleefully minces, and the dead end aspiration that ostensibly binds this group of misfits together. In reality, Morris says, this cell has come together because of a shared persecution myth, but as the thinking becomes more woolly and the goals murky, it’s more about belonging to a group and the effort counting for something. There’s nothing divine about this brood, their failings are man made – self-righteousness, envy, hate, pride and spectacular lack of imagination. Just don’t say “welcome to Bradford”.

The dynamic within the group generates plenty of interest. Omar, the one eyed leader in a land of blind men, is sure he hates the West’s war on Islam and sees violent struggle as the remedy (with the proud support of his wife and child) – though his fundamentalist brother, “wisdom shits” and all, and his envy of his moral certainty, suggests it’s as much an act of familial rebellion as a divine calling. Omar’s no.2, Barry, is a failed human who’s parasitically adopted Islam to legitimatise his sense of dislocation. Fessal is a sheep who symbolically dies with them when his explosives go off in the middle of a herd and Waj, the dunce, hero worships Omar and is quite happy to be told what to think by him as a consequence. That it’s about the group and not the cause, is underlined by the late addition, Hassan, who joins up on the back of an anti-authoritarian fantasy and subsequently tries to bail out at the last minute, having realised as much.

Two thirds of the film relies on the hapless interplay between these characters, and it’s apparent that this is not satire, but farce, in which you’re invited to pity, and in some instances, like this sad troupe, despite their murderous intensions. In fact, extract terrorism and replace it with captialism and you could be watching a more verbose episode of Only Fools and Horses. The screenplay shows a grasp of group dynamics that reflects an astute understanding of human failure. Nigel Lindsay and Kayvan Novak’s characters might even be lovable, were they not planning to murder the film’s liberal audience of Morris acolytes.

The character’s moral confusion is the element that occasionally jars with Morris’ well-practiced method. As with his previous work, we remain several steps ahead of the people on screen and pat ourselves on the back for being intelligent enough to enjoy the joke. We laugh frequently, but these are cartoon characters inhabiting genuine geo-political territory and the overall effect is quietly unsettling because they don’t represent a false picture of Islam, rather a branch of its thinking which has successfully murdered thousands. In the final third, the film gravitates toward tragedy, and like any movie involving the Bee Gees, there’s laughter punctuated by long periods of silence, as these degenerates literally talk themselves to death. Omar’s senseless demise, in which, in defeat, he bombs a pharmacy to give the “mission” a scintilla of meaning, is desperately sad and unexpectedly moving.

If the tone is sometimes uneasy, there is at least a wealth of well-written scenes. Omar’s use of a Disney story, The Lion King, as a proxy Koran for his own struggle, is a bit sized chunk of irony and neatly alludes to the doublethink – the simultaneous rebellion against Western culture while enjoying its trappings, which skewers the brains of angry British Muslims. Barry’s suggestion that the group should bomb a mosque to prompt an uprising is an inspired piece of comedy, while the group’s use of “Puffin Party”, a children’s website, as a forum for planning their activities, prompts a chuckle explosion that could decimate your face. Morris, a zoology graduate whose obsession with animals have never abated, continues to mine laughs in their name, while reserving the human as the most thoughtless animal of all.

The sitcom mould, from which these characters are forged, makes the film’s running time a stretch, and Morris’ direction shows little evidence that he’s used the cinema format as anything more than a vehicle for two hours worth of ideas. Funny as it is, with talk of Guantanamo Bay’s specially trained rapist, a car sabotaged by Jewish parts and an irrational hatred of decadent mini-baby bells, the narrative has the feel of a patchwork of sketches, and little momentum as a consequence.

The quintessential paradox of Morris’ film is a bomb in a bag that could go off and kill the enterprise at any moment. It’s the knowledge that the root of Four Lions – the catalytic moment which propelled Morris into his research maelstrom, prompting a trawl through the absurdities of failed terrorism and doctrinal fudge, was a conspicuously successful, well planned and premeditated act of terrorism that killed 52 people. Aside from the film itself, there are allusions to it throughout, not least a couple of vignettes which lampoon police panic and incompetence, all of which flirt with flippancy given the contrast between Morris’ world of farcical happenstance and the story told by murdered Londoners. However much you enjoy Four Lions, this paradox eats away at you. It’s reasonable to suggest that if you’re minded to do so, you can find the absurd in any subject and Morris has performed a public service in reminding us that Islamic terrorism is often the province of the clueless disaffected – the sociopathic and the weak, bound together in a wilful pact of ignorance which provides the identity and purpose which a liberal, atomised society can inadvertently destroy.

Promoting the film, the director has cited examples from the book of Islamic Harlequins, flaunting the film’s pretentions to reality – the failed Bluewater bomb plot, the dopes that sent a raft packed with explosives to sink a ship, only to watch the raft sink with the weight, and so on. So Morris has sought out the ridiculous and he has found it. He’s therefore made a film to fit a thesis. But although terrorists are inherently ridiculous and the very notion of a holy war, a misnomer, it would be a mistake to walk away from Morris’ take on the subject and delude yourself that Jihad is prosecuted by incompetents and wastrels. The events of July 7th and 21st 2005 remind us that there’s both competence and idiocy to contend with, but although it’s healthy and necessary to laugh at the latter, it’s still the former that need concern us. In the meantime, this inoffensive look at the flipside is a welcome antidote to cultural hysteria.