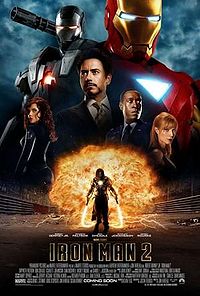 In the couple of years since the original Robert Downey Jr blockbuster, the profile of the titular hero has skyrocketed. As the new film begins, Tony Stark delivers the keynote speech at his technology companies’ expo. We learn that his blood is being poisoned by an as yet unidentified substance connected to his weaponised prosthesis. If his demeanour is symptomatic, we can infer this to be a toxic combination of hubris and smarm. But Iron Man has a problem that dwarfs Downey Jr’s history of alcohol and substance abuse; he is now a franchise. Franchises carry with them the weight of expectation, and that’s before an audience gets anywhere near it.

Iron Man 2 doesn’t have the luxury of being able to measure its success against traditional yardsticks like effective storytelling or box office performance. It has more to do. The sequel is just one component of a lucre grabbing strategy predicated on integrated products – a business model known as synergy. Favreau’s follow-up must sell AC/DC albums, Burger King Meals, Toys, Video Games and Comics.

That’s de rigueur these days and has been for thirty years, but what makes Iron Man a new proposition is that in addition to the revenue streams, which it nurtures like a mother pig suckling its young, it must also gestate other Marvel pictures, not least the proposed adaptation of The Avengers series and Kenneth Branagh’s forthcoming Thor. Subordinated to these franchise imperatives, you wonder if there’s any room left for a movie. There is. Just. It’s buried under Marvel corporate ambitions. Occasionally the film sticks out its hand and wiggles its fingers to show it’s alright but the long term prognosis looks bleak.

This superhero sequel is battered, though not broken, by these additional demands. Fittingly, the film’s principle theme is that of the enemy within – namely the US military industrial complex that’s anxious to acquire Stark’s suit to prosecute future wars. Stark, let’s not forget, is a reformed warmonger – a sort of one man, unilateral preventive war machine, who boasts to the senate hearing convened to demand his suit, that he’s “privatised peace”. This is the movie’s intellectual meat. Stark’s contention that the US government can’t be trusted with his technology, and that keeping America safe is better handled in the private sector, taps into the prevailing mood of distrust in government that’s gripped since the Bush ascension.

Stark’s argument against enlisting the government as a crime fighting partner is that he’s decades ahead of his competitors and can therefore fight the good fight without their help. No sooner has he shown the senate a showreel of botched attempts to replicate his technology by foreign governments, than Mickey Rourke’s Ivan Vanko appears on the scene. He’s the vengeful son of a former Stark employee, who’s created his own metal strap-on with “whiplashing” accoutrements. This allies him with Stark’s competitor, the subtlety monikered Justin Hammer, played by Sam Rockwell, and prompts a fresh push by the government to wrestle the original suit from its inventor.

For the first hour Iron Man 2 is an enjoyable and familiar enough super-hero sequel, suiting up with genre clichés but the screenplay, in hoc to those franchise interests, has little time to develop the movie’s underlying themes and build a story. The script is highly verbose, in order to feed Stark’s smart mouth, and when it isn’t belching banter, it’s defaulting to setpieces, in order to satisfy the imagined demands of its fanbase.

The patter between Downey Jr and Gwyneth Paltrow is fairly endearing and makes for a light, if breathless first hour. Thereafter, the Marvel wishlist taped to Favreau’s clipboard begins to get a look in, with the introduction of Don Cheedle’s militarised Iron Man, a S.H.I.E.L.D sub plot in service to future superhero sequels, (that’s yet more from the crowded Marvel universe) and the ambitions of Rourke and Rockwell’s weapon’s manufacturer, all beating a path to the frenzied, heavy metal climax.

The crowded screen just about stays up, despite the weight of it all, but what’s lost in the bustle is the unburdened storytelling that marked out the first film. In this cast of thousands, few but Downey Jr and Paltrow make any impact. Rourke is savage but slight as the vengeful Russian, relying on physical bulk and his mangled face to unsettle those still trying to digest their Whiplash whopper. Rockwell’s oily arms trader gets a few decent lines – not least a genuinely funny rant about a smart bullet – “any smarter and it would write a book, in fact it would make Ulysses look like it’d been written in crayon”, but for the most part he’s Tony Stark without the charisma; not a recommendation when you spend so much of the film in his company. Scarlett Johansson is little more a masturbatory fantasy and Don Cheedle, replacing the first film’s Terrance Howard, stands still while the movie hurriedly pushes forward without his help. When a character is this flat, one wonders how he can fit into Stark’s three-dimensional suit. Only Gary Shandling’s extended cameo as the sardonic senator stands out.

There’s a fun, colourful movie to be enjoyed here, if you can tune out the noise, but in bulking out the screenplay with so many extraneous sub-plots and a deluge of supporting characters, Marvel have made a film which doesn’t play well as a standalone piece. An anonymous score does nothing to resuscitate deadened senses and the visual effects, though solid, brighten the screen but are poor substitutes for characterisation and style, those two absent friends we miss the most during the show.